In my post a few weeks ago, Now I Know My ABCs…, I neglected to mention that the first two books discussed focused on a certain construction known as a Calligram.

A very basic definition of a calligram is “a poem, phrase, or word in which the typeface, calligraphy, or handwriting is arranged in a way that creates a visual image. The image created by the words expresses visually what the word, or words, say” (according to Wikipedia, which I don’t hold as the gospel truth, but in this case, I think it’s safe enough).

This delightful confection of characters was introduced to me by a friend with the words, “Google it. You’ll thank me.” So here I am, thanking her for bringing this to my attention. In Googling it, I stumbled upon all sorts of delicious websites to spend hours drooling over.

What’s wonderful about the calligram, in addition to its very existence, is its ability to be used by many languages. For instance, Arabic calligrams make use of serene Arabic script, while this website showcases Assyrian Calligraphy, and this website shows off Georgian calligrams. You can even make a calligram out of musical notes! 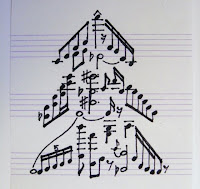 It’s a lot of fun, and hard work, to make one yourself. I may post an attempt or two if I ever finish one of my own. In the meantime, I’ll just admire everyone else’s.