Skip to content
This post doesn’t have anything to do with books, but as I’m equally enamored with language itself, here’s something to think about: 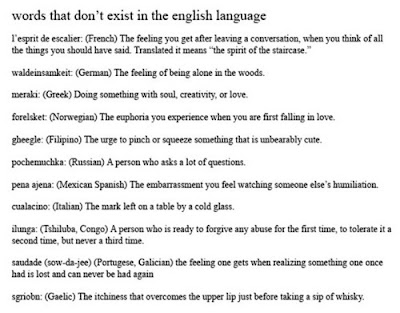 This list is a good start, but I was disappointed not to find any Japanese words on here. Some of my favorites are hazukashi, meaning to be embarrassed on someone else’s behalf for their rude or ignorant societal faux pas, and shigataganai, meaning something happened that you can’t change so you will be like the willow and bend to the winds of fate rather than break (or something like that) (and yes, I guess in English you could just say, “shit happens” or “that just happened”, but there’s something about saying shigataganai with that very French shrug [yes, I said French, and if you’ve ever spent time with someone French and watched them shrug, you’ll know what I’m talking about] that feels simultaneously accepting and dismissive of the situation that I don’t think those English phrases capture). There’s also a word in Brazilian Portuguese, something like gehtozhu (sorry for butchering the spelling), that means something like someone who is a little shady and tries to get around situations in sneaky ways.

Anyone else have favorite words in another language that don’t exist in English?