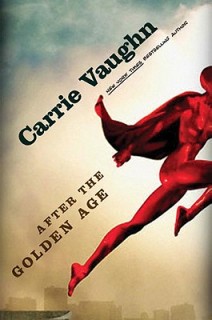 Are you as surprised as I was to see this on my reading list? Okay, probably not, but this was definitely one of those “judged a book by its cover” reads and I’m three-quarters glad that I did. Why only 3/4ths? Because the book was great for that long. Then she somehow lost it right at the end – don’t you just hate that? BUT, because the first 3/4ths of the book was still really compelling, I’m going to blog it and recommend it anyway.

Celia West is the daughter of superheros. Captain Olympiad and Spark are actually Dad and Mom – beyond-wealthy socialites with a conscience who formed the crime-fighting team, the Olympiads. Unfortunately for Celia, she’s superpower-less. Celia is a forensic accountant, and as sexy as that job sounds, she has actually been placed as an assistant to the DA on the case against the Destructor, the Olympiads’ #1 nemesis. Why? Because after all the destruction The Destructor has managed to cause, he’s actually going to be put away for something like tax fraud. Ain’t that always the way?

Estranged from her family, Celia is nonetheless still acting in her role as “Bait Girl,” meaning she continues to be kidnapped as part of a new rash of high-profile crimes hitting Commerce City. She’s not scared – why should she be? This has happened so many times before – but it IS annoying to have to keep being rescued by your parents and their friends. Especially when she’s done so much to distance herself from them, from her rebellious teenage self, and from her sealed juvie record which is about to be leaked and make the biggest, darkest secret from her past very public knowledge.

When, once again, Celia’s thrust back into the limelight, all she wants to do is squirrel away in her apartment, maybe consider buying a new identity, and moving to another city. But in her work for this big “Trial of the Century,” she’s actually been making some progress. So who cares if she’s been fired? If she could just get her dad to let her into the Olympiads’ computer system, she just may be able to follow the paper trail that could lead them all to who is actually behind the new crime spree, the mayor’s build-up to martial law, and quite possibly the secret behind even her parents’ superpowers.

It is just at the moment that Celia is coming back to herself as her own proud, not powerless character, that the book takes a dark turn with the plot. Death, destruction, and a really fast wrap-up make me want to ask this author for a rewrite of the last 30 pages. As I said before, though, worth reading for the quick pace of writing, the humor, the brief characterizations, and overall, just a nice break from everything else I’ve been reading out there.