Skip to content
Thanks to the lovely Ms. Emily Crowe over at
As the Crowe Flies (and Reads!)
for introducing me to the Literary Blog Hop hosted by
The Blue Bookcase.

You might have noticed my blog title is Wildly Read, tagline: Wildly, if not widely, read. Yes, I do blog about children’s books, mass market romances, non-fiction, and whatever else happens to catch my reading fancy, but I also read and blog about my more traditionally literary tastes, and so make the case that I be allowed to participate in the Literary Blog Hop.
This week’s question: What work of literature would you recommend for someone who doesn’t like literature?
I’m going to jump past the whole discussion about what a “work of literature” is, as it’s long, and subjective, and I’d rather focus on my suggestions.
For everyone: 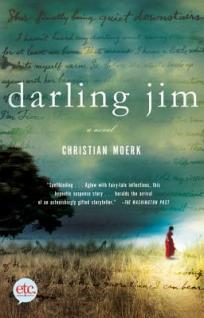 Darling Jim by Christian Moerk
Yes, I’ve written about this book before (and you can read my full review of it here), but I think this was probably the most engrossing literary mystery I’ve ever read and so fits this category. Here is the crux of the tale:
In a sleepy little village in Ireland, a postman discovers the bodies of three dead women. Two were discovered right away – a bloody fight to the death that resulted in them both leaving this world. The third woman was discovered later, hidden behind a wall. Death and murder, by their very nature is a pretty creepy business, but there’s already a twist. All three women were related: the two young girls are the nieces of the older woman, and it looks like the older woman held them captive, slowly starving and poisoning them to death. Even later it is discovered that another person was also held captive in the house, but apparently managed to escape. No one knows why this gruesome episode took place.

No one, that is, until a different postman discovers a package in the post office, sent by one of the dead girls! He steals the package and opens it to find a diary, kept while the girl was held prisoner in her aunt’s house. As he reads her diary, she begins to tell him a tale of sisterly love and devotion, an aunt’s unstable mind, and a traveling bard named Jim who ensnares women far and wide.

His life already out of control (fired from his job, evicted from his apartment), the postman sets off on a quest to the village the girls are from, to find out what led them all to their pitiful end. The diary haunts him, her story haunts him – so honest, so lacking in self-pity or remorse. And what of the third person held in that house? Who was it and where are they now?

The way the story unfolds is part of the genius, as a creepy Irish fable slips in between the postman’s current POV, diary entries from the missing girl, and the events that took place in the past that led up to the girls’ imprisonment; together they help the reader uncover the mystery of a wandering storyteller and the women who loved him
Has a more female-bent: 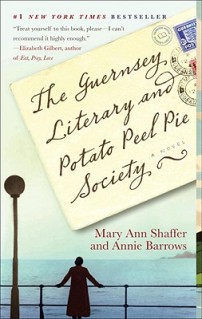 The Guernsey Literary and Potato Peel Pie Society by Mary Ann Shaffer and Annie Barrows
Absolutely charming, this post-World War II epistolary novel follows an American author as she begins a correspondence with a man on the British island of Guernsey, which was occupied by the Germans during the war. This is another one I’ve posted about many times; for the full review go here, and I’ll repost this snippet:
The letters are all to, from, or about Ms. Juliet Ashton, the central character in this novel. She is a writer by trade, so her letters are wonderfully descriptive, yet always leave you wanting to read more. She receives a letter from a man on the island of Guernsey. He had purchased a book written by Charles Lamb, which had been previously owned by Ms. Ashton. He writes to say he enjoyed this first taste of Charles Lamb and wonders if she would be able to help him in procuring more works of similar literary quality and merit.
Ms. Ashton beings writing with Mr. Dawsey Adams (the man who wrote her), and is thus introduced to the society he is apart of – The Guernsey Literary and Potato Peel Pie Society. The current year being 1946, people are still recovering and rebuilding their lives from the devastation of World War II. This society was begun during the German occupation of the Channel Islands, of which Guernsey is a part. Soon Juliet is corresponding with many of the members of this society, slowly uncovering the stories of German wartime occupation – the love, loss, friendship, and courage that occurred on this isolated island during the war – and getting a first-hand look at what that means in her own life.
Don’t mistake the sweetness of the story for a lack of literary talent. The saddest part of this tale is that its original author, Mary Ann Shaffer, passed away before she finished the book, and her niece, children’s author Annie Barrows, finished it for her. Readers are lucky we have this one exceptional book.
Has a more male-bent: 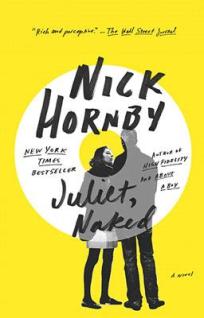 Juliet, Naked by Nick Hornby
I could have sworn I had written a review of this somewhere, but can’t find it, so introducing a gushing review of Nick Hornby’s latest novel. What I love most about this book is that it harkens back to the quirky, witty, brutally honest self-reflection, and sweet triumph of Nick Hornby’s early works, like the great High Fidelity.
Duncan, a music buff in England obsessed with the work of American song-writer Tucker Crowe, discovers Tucker’s latest work, an album of stripped-down recordings called Juliet, Naked. Unfortunately, his girlfriend, Annie, doesn’t love it so much. This brings into sharp relief that Duncan and Annie may or may not love each other as much as they thought they did.
In a lovely plot twist, it is Annie, not Duncan, who gets in touch with Tucker. Tucker has been hiding away in America, ignoring his cult-rock-star fandom, in order to take care of his equally gifted young son. In typical Nick Hornby-style, Tucker is exceedingly aware of his faults as a human, a husband, a father, and a musician, but still has a spark of greatness about him. Annie is just discovering what it means to have her own life and her own opinions, and as all great love stories go, these two people begin to find out it isn’t too late for them – in life or in love or in music – after all.
I put this one under the “more male” category because even though I enjoyed it, there’s something voyeuristic about reading the way Nick Hornby writes about middle-aged (or approaching middle-aged) male emotions. It’s so brutally honest about hopes and fears, regrets and failures, triumphs and hopes. Though there are sad moments, overall the story is one of inspiration in many forms.