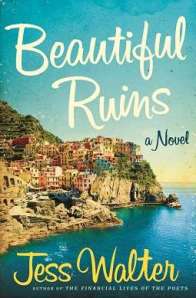 I’m in an informal book club with a group of lovely women my friend Jaime (a landscape architect) brought together. We came together to celebrate Jaime’s birthday, and in a very natural way throughout the course of the evening, we decided to form a one-time book club to discuss Ann Patchett’s Truth & Beauty (shout out to my Book Wormen Group!). This is not about that book. This is about the second one-time book club we formed to discuss Jess Walter’s Beautiful Ruins.

I hadn’t intended to review it, because I usually only review books I like. Also, we haven’t talked it over in my book club yet.  But I gave this two stars on my Goodreads account, so my friend asked me why, and this was my response. It’s masquerading as a review:

I really wanted to like it! It was on my TBR list, and then a book group I’m in chose it, so I was excited to pick it up. But it just annoyed the crap out of me almost from the beginning. I think it has a lot to do with the place I’m at in my own life right now, but everyone was SO whiny and self-centered and dishonorable that I had a lot of trouble feeling comfortable with any of the characters. Everyone was just so f-ing PASSIVE! “Wah, this all happens TO me. I’m in these situations I don’t like but will continue to go along with because someone else is steamrolling right over my (mostly internal) weak protests.”

Pasquale (a main character) was the only character I actually LIKED (though I get you don’t have to like a character to connect with a book), and it wasn’t just because I was proud of him for doing the right thing, but because he did something – anything – at all to change his life. Even Dee (another main character) said at one point that being with her husband was like being on an island – like she was just waiting with him in this middle period, waiting for her life to begin. This was a major theme throughout the course of the book, so it was irritating she was this passive in her marriage; she doesn’t consciously DO anything to change her life, or her son’s life, until Pasquale re-enters (I’m being vague to avoid spoilers in case anyone else reads this rant). Though this clearly makes Pasquale the catalyst for change (and this happens several times throughout the course of the book), because the book is written in alternating viewpoints between various characters, the changes that do occur seemed to me to be almost afterthoughts in the plot rather than the purpose.

In terms of the writing style, again that was something I really wanted to like, because in theory, I’m super supportive of multiple POVs and various narrative styles to move plot forward, but the way it was executed made me feel uncomfortable (again) and disjointed and vaguely annoyed almost the entire time. Then there’s the writing itself, which I thought was a little rambly and whiny and self-congratulatory and cliched on the existential bits (and there was a part where the author consciously used a big metaphor and chose El Dorado when Don Quixote would have been a much better and more relatable choice). Also, I didn’t like the last chapter, except for the very last Pasquale/Dee part. I suppose some argument could be made that wrapping up their story was given greater context by wrapping up the other loose ends of secondary and even tertiary characters, but the wrap-ups seemed too pat for me. There were two beautiful lines in the entire book that gave me pause, and other than that, the writing didn’t knock my socks off. So, all of that combined, two stars.

The two lines that struck me were these (sorry for the lack of page numbers, but I already returned my library book):

“Life, he thought, is a blatant act of imagination.”

“He thought it might be the most intimate thing possible, to fall asleep next to someone in the afternoon.”

Here’s the Reading Guide my book group may or may not use in our discussion, but you may want to consider using it for your own.

If you want to hear from people who wildly disagree with me, check out these resources: