Waiting on Wednesday (WoW) is a weekly meme hosted by
Breaking the Spine. 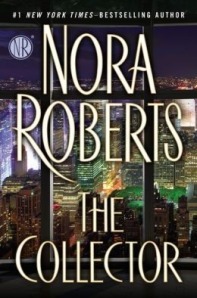 The Collector
by Nora Roberts
9780399171086, Penguin Putnam, Hardcover, $27.95, Pub. Date: April 15, 2014
When professional house-sitter Lila Emerson witnesses a murder/suicide from her current apartment-sitting job, life as she knows it takes a dramatic turn. Suddenly, the woman with no permanent ties finds herself almost wishing for one.

Artist Ashton Archer knows his brother isn’t capable of violence—against himself or others. He recruits Lila, the only eyewitness, to help him uncover what happened. Ash longs to paint her as intensely as he hungers to touch her. But their investigation draws them into a rarified circle where priceless antiques are bought, sold, gambled away, and stolen, where what you possess is who you are, and where what you desire becomes a deadly obsession.
Read an excerpt here.

One thought on “Waiting on Wednesday: The Collector by Nora Roberts”