September is upon us! Fall is nigh! And so are these books, which release this month. 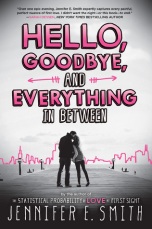 Hello, Goodbye, and Everything in Between
Jennifer E. Smith
Pub Date: September 1

Publisher Description: On the night before they leave for college, Clare and Aidan only have one thing left to do: figure out whether they should stay together or break up. Over the course of twelve hours, they’ll retrace the steps of their relationship, trying to find something in their past that might help them decide what their future should be. The night will lead them to friends and family, familiar landmarks and unexpected places, hard truths and surprising revelations. But as the clock winds down and morning approaches, so does their inevitable goodbye. The question is, will it be goodbye for now or goodbye forever?

Publisher Description: When Lieutenant Eve Dallas examines a body in a downtown Manhattan alleyway, the victim’s injuries are so extensive that she almost misses the clue. Carved into the skin is the shape of a heart—and initials inside reading E and D . . .

Ella-Loo and her boyfriend, Darryl, had been separated while Darryl was a guest of the state of Oklahoma, and now that his sentence has been served they don’t ever intend to part again. Ella-Loo’s got dreams. And Darryl believes there are better ways to achieve your dreams than working for them. So they hit the road, and when their car breaks down in Arkansas, they make plans to take someone else’s. Then things get messy and they wind up killing someone—an experience that stokes a fierce, wild desire in Ella-Loo. A desire for Darryl. And a desire to kill again.

As they cross state lines on their way to New York to find the life they think they deserve, they will leave a trail of evil behind them. But now they’ve landed in the jurisdiction of Lieutenant Dallas and her team at the New York Police and Security Department. And with her husband, Roarke, at her side, she has every intention of hunting them down and giving them what they truly deserve . . .

Publisher Description: In LET’S PRETEND THIS NEVER HAPPENED, Jenny Lawson baffled readers with stories about growing up the daughter of a taxidermist. In her new book, FURIOUSLY HAPPY, Jenny explores her lifelong battle with mental illness. A hysterical, ridiculous book about crippling depression and anxiety? That sounds like a terrible idea. And terrible ideas are what Jenny does best.

According to Jenny: “Some people might think that being ‘furiously happy’ is just an excuse to be stupid and irresponsible and invite a herd of kangaroos over to your house without telling your husband first because you suspect he would say no since he’s never particularly liked kangaroos. And that would be ridiculous because no one would invite a herd of kangaroos into their house. Two is the limit. I speak from personal experience. My husband says that none is the new limit. I say he should have been clearer about that before I rented all those kangaroos.”

“Most of my favorite people are dangerously fucked-up but you’d never guess because we’ve learned to bare it so honestly that it becomes the new normal. Like John Hughes wrote in The Breakfast Club, ‘We’re all pretty bizarre. Some of us are just better at hiding it.’ Except go back and cross out the word ‘hiding.'”

Jenny’s first book, LET’S PRETEND THIS NEVER HAPPENED, was ostensibly about family, but deep down it was about celebrating your own weirdness. FURIOUSLY HAPPY is a book about mental illness, but under the surface it’s about embracing joy in fantastic and outrageous ways-and who doesn’t need a bit more of that?