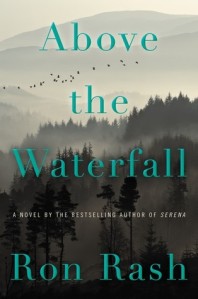 This is the third Ron Rash book that I’ve read, having fallen in love with him after reading Serena years ago, which was originally recommended by my good friend and fellow bookseller, Emily of As the Crowe Flies and Reads. For my extensive review of that book (and I DO recommend reading it before seeing the film), click here. For my review of the book of short stories of his that I read, Burning Bright, (which I also greatly enjoyed and recommend) click here.

Unfortunately, though Ron Rash is rightfully referred to at a “staggering talent,” and though I did admire the two books I read previously, I did not see him live up to his potential in this latest novel. I’m warning you right now that this won’t be a gushing review, so please move on if you’re opposed to those types of things.

The book is told in somewhat alternating chapters narrated by Les, a sheriff nearing his retirement (literally weeks), and his sort-of-romantic interest, Becky, who is a local park ranger. I believe Mr. Rash was trying something new in this book by writing Becky’s chapters in a type of poetic prose, with some of Becky’s nature poems thrown in, while Les’s chapters were written in more standard prose, though he was a man of few words. I do enjoy poetry, and thought Becky’s poems were quite lovely and evocative of ee cummings, but I had difficulty settling into her chapters. They were few and far between, and mostly consumed with either flashbacks of the school shooting she experienced, her grandparents farm where she recuperated, or descriptions of the present-day North Carolina landscape. I didn’t think they added much to story, and frankly, I wasn’t that impressed by the plot anyway. What I enjoyed about Burning Bright was quick the slice-of-life views of Appalachian communities that the short story form supported. In Above the Waterfall, it was as if Mr. Rash took one of those stories and then dragged it out for 250 pages, which was frankly unnecessary. I also found Becky’s sections difficult to follow. It was as if my brain kept trying to hold onto the words to make sense of them, and the meaning kept slipping away, just out of reach. Reading her chapters always pulled me out of the narrative, rather than forwarding the plot, which made reading the book overall more difficult than I wanted or needed it to be.

Back to the plot – Anyone who’s read Elmore Leonard’s books about Raylan or seen the show Justified will have a pretty decent working knowledge of the meth problem in rural towns. Mr. Rash adds nothing new to the scene. He doesn’t give a particularly edgy accounting of that life nor does he push the boundaries of the heartache meth can cause and the affect it has on local communities. As a mystery aficionado, the mystery in this novel was very stale, with no gasping reveals and instead only a quiet resolution. In fact, as much as this sounds like a backhanded compliment, the best praise I can give is that this novel held really no surprises, much like the town’s inhabitants, and so perhaps, in that mirroring, there lies a quiet literary genius. If so, I admit it was lost on me, and perhaps that’s my shortcoming rather than the book’s. I’m hoping Mr. Rash’s next work will dive a little deeper into whatever story he’s telling.

One thought on “Book Review: Above the Waterfall by Ron Rash”