A lot of giraffe-themed books have been popping up lately. Thanks to Laura at Tampa Bookworm for a giraffe book recommendation that sparked this post.

Laura recommended The Giraffe Who Was Afraid of Heights by David Ufer, illustrated by Kirsten Carlson (9781934359051, Sylvan Dell Publishing, $8.95). I haven’t read it yet, but I always appreciate the recommendation.

When Lulu Went to the Zoo
by Andy Ellis
9780761354994, Andersen Press USA, $16.95
Though not primarily about a giraffe, this book does feature a giraffe on the cover. This is a sweet book about a little girl who doesn’t like seeing the caged animals, so she frees them and takes them all home to live with her, with some funny results.

Raf
by Anke de Vries & Charlotte Dematons
9781590787496, Boyds Mill Press, $16.95
Raf is short for Giraffe, Ben’s favorite stuffed toy. Sort of like the traveling gnome from the Travelocity commercials, when Ben loses Raf, Raf starts sending Ben postcards from his travels with the people who found him. But the real question is, will Raf make it back to Ben in time for Ben’s birthday? 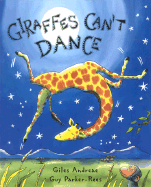 Giraffes Can’t Dance
by Giles Andreae & Guy Parker-Rees
9780439287197, Scholastic, $16.99
Gerald is my favorite name for a giraffe, and this book is about a Gerald. The animals make fun of Gerald’s awkward dancing at a jungle party. Gerald mopes away in shame, but a special friend helps Gerald see there’s a type of music out there for everyone to dance to.