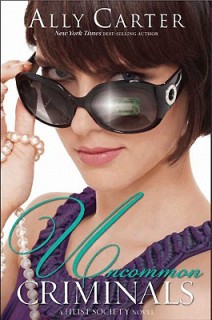 Teenage girl thief. That should really be ‘nough said, right?

Kat (Katarina Bishop) comes from a family of thieves. One of THE family of thieves (of which there are about 7 in the world). In book 1, Heist Society, Kat tries to give up her thieving ways, only to end up pulling the biggest heist of her life with a full team of other teenage thieves in order to clear her father’s name. In book 2, Kat has stayed true to her desire not to steal for stealing’s sake. She has begun returning stolen goods taken from Jewish families during World War II. Only these she pulls these jobs on her own. No team, no backup, half the time no one knows where she is. That doesn’t sit too well with certain members of her team/family, most notably the sexy possible love-interest Hale and Kat’s cousin Gabrielle. Hale and Gabrielle are trying to badger Kat back into the family fold when Kat is contacted by an old woman and her grandson who beg her to make the heist of the century to return a stolen emerald to their family and restore their family’s name.

When you head a team of teenagers that has stolen a Cezanne from one of the most heavily guarded museum exhibits in the world, in certain circles, your name becomes a famous one. Names are powerful things, like the name Visily Romani, one of the sacred names among thieves. When the old woman evokes the Romani name, saying he is the one who sent her to Kat, Kat knows she has to take this job.

But this is not just any emerald, and this is not just any job. Kat would have to steal the Cleopatra Emerald, the one rumored to be cursed by the doomed love between Cleopatra and Marc Antony, the one no one has ever successfully stolen, including Kat’s very own Uncle Eddie. The one he’s forbidden anyone in the family to steal. Kat knows she’s on her own for this one…or is she really? Hale and Gabrielle have no intention of letting Kat go after the emerald by herself, and as they crisscross the globe, their team grows in numbers as faces old and new let Kat she doesn’t have to be alone, on this job or any job in the future.

The plot thickens with a double-cross, a first kiss, a long-lost family member, and the customary high-class stakes, adventure, and excitement I’ve come to expect from an Ally Carter novel. Not super-fluffy, but also missing most of the super-teen-angst (thank goodness!), this is a light, enjoyable, well-written read. You don’t need to have read book 1 to understand book 2, but it’s an equally enjoyable read, so I highly recommend you dip into both.

One thought on “Book Review: Uncommon Criminals by Ally Carter”