Previously in my capacity as Children’s Department Manager for the Odyssey Book Shop, I had the opportunity to look over publisher’s catalogues at the new books for each season. I was lucky enough to get my hands on some Fall 2011 catalogues, so decided to revive my seasonal picture book highlights series.

Disclaimer: I have not seen these books with my own eyes. So, these books have been chosen based on my knowledge of the author and/or illustrator’s previous work, the catalogue description, and my own personal taste.

Nine diggity dogs get ready to join a doggone jamboree!

Meet Tinkles, Gracie-pants, Lovie, Fritzie, Weenie, Walter, Comet, Ike, and Jack. It’s time for these pups to let their owners dress them up in costume! But one of them is shy. Another is too jumpy. Do any of them really want to join the fun? Once they see the silly and cute duds they’re wearing, they will! But they need to hurry—the dog parade won’t wait forever. And it’s not to be missed! 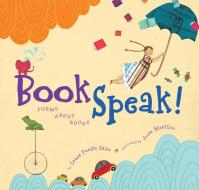 A collection of wacky, whimsical poems about books and all the treasures they contain.

Laura Purdie Salas, the acclaimed author of Stampede!, is back with another collection of wild and weird, wacky and winsome poems about all the magic to be found on a single bookshelf. In BookSpeak!, each poem gives voice to a group that seldom gets a voice . . . the books themselves! Characters plead for sequels, book jackets strut their stuff, and we get a sneak peek at the raucous parties in the aisles when all the lights go out at the bookstore!Illustrator Josée Bisaillon’s mixture of collage, drawings, and digital montage presents page after page of richly colored spreads filled with action and charm. Together, Salas and Bisaillon deliver a unique collection brimming with ideas as much about spines and dust jackets as they are about adventure and imagination. 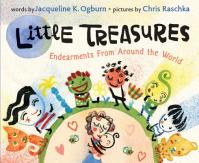 A tender collection of endearments for children the world over. All over the world, people express their love for their children through endearments, such as “sweetie pie” or “peanut.” A child might be called little angel, angelito, in Spanish or precious, bao bei, in Chinese or my sweet little moon, mera chanda, in Hindi.

Little Treasures offers a wealth of endearments in fourteen languages to share with your own beloved poppet and petit chou.

Chase those dreary blues away!

Everybody gets the blues sometimes—dogs and cats, moms and dads, even tiny babies. Just take a look around. If you help someone else who’s feeling sad, you might find that your blues are gone. Or maybe the Blues Guy will come along, to listen or sing the blues with you and sit by your side. A native of New Orleans, Leslie Staub wrote this story after experiencing Hurricane Katrina. Yet this book’s rhythmic, bluesy text and hip, eye-catching illustrations are just right for anyone who’s ever felt those mysterious feelings of sadness—then found that hope and sunnier skies are close at hand.

Wild West chaos and creative problem solving are the force behind a well-loved American institution.

What’s a California miner to do when gold dust sifts right out of his holey pockets? With such a raggedy wardrobe, he may as well be mining in the vanilla (that is, his birthday suit)! Good thing Levi Strauss is out west, ready with his needle and a head full of bright ideas. With some quick thinking, quicker stitching, and handy arithmetic, Levi keeps all the gold rushers clothed—and becomes a modern American hero. A Wild West tall tale, Levi Strauss Gets a Bright Idea celebrates creativity, innovation, and the ubiquitous item that fills the closets of grateful jeans wearers worldwide.