Or, in other words, my most anticipated new releases for the month of June. Mark those calendars now, then run out to grab them in their first week on the shelves. 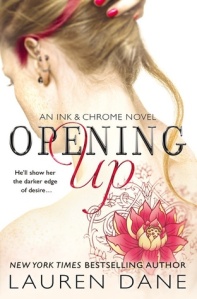 Go ahead, judge me, but ever since I signed up to finally (finally!) get my motorcycle license, I’ve been conducting all kinds of motorcycle research, because nerd. Clearly one of those strands of research has led me down the dark, dark path of motorcycle romance novels. So, without further ado, presenting the first title in a new series by erotica author extraordinaire (read her Brown siblings series if you want hot sex among tattooed people), Opening Up:

“The men of the Twisted Steel custom motorcycle shop are great with their hands… and they’re not afraid to get dirty.
PJ is exactly the kind of woman Twisted Steel owner Asa Barrons doesn’t need. The last thing he wants to do is mix business with pleasure, and PJ has some of the best custom detailing he’s ever seen. But the chemistry between them won’t be denied, and soon he’s introducing her to a whole new world in the bedroom, pushing her far beyond anything she’s ever experienced. PJ finds she can’t get enough, but how far is too far before he consumes her completely?“

June 30: The Mask by Taylor Stevens

The fifth book in the Vanessa Michael Munroe series, I’m personally hoping that this book lives up to the promise of the first few. I wasn’t as enchanted with book #4. Michael keeps getting colder instead of more in touch with herself. It’s not that feelings of humanity don’t abound; it’s that I feel less connected to the characterization because humane choices seem almost accidental or incidental, and by this point in the series, shouldn’t Michael have a little better sense of self? Picky-picky, I know. Still totally worth reading for the attention to detail, thriller aspects, and the hope that we’ll see more of Michael and her community, her backstory and her future, come to light. Considering this synopsis, I just might get my wish:

“Vanessa Michael Munroe, chameleon and information hunter, has a reputation for getting things done: dangerous and not quite legal things that have taken her undercover into some of the world’s deadliest places. Still healing from a Somali hijacking gone wrong and a brutal attack that left her near death, Munroe joins her lover, Miles Bradford, in Japan where he’s working as a security consultant protecting high-value technology from industrial espionage. In the domesticity of their routine she finds long sought-after peace—until Bradford is arrested for murder, and the same interests who targeted him come after her, too.
Searching for answers and fighting to stay alive, Munroe will soon discover how far she’ll go to save Bradford from spending the next twenty years in locked-up isolation; how many laws she’ll break when the truth seems worse than his lies; and who to trust and who she must kill. Because she’s a strategist and hunter with a predator’s instincts, and the man she loves has just stabbed her in the back.
With break-neck pacing, incendiary prose, and an unforgettable cast of characters, The Mask features Vanessa Michael Munroe: a brilliant, lethal heroine who will stop at nothing to find the truth, no matter what it may cost.”

If you’re new to the series, here’s the publisher’s book trailer for the first book in the series, The Informationist.

One thought on “June New Releases”