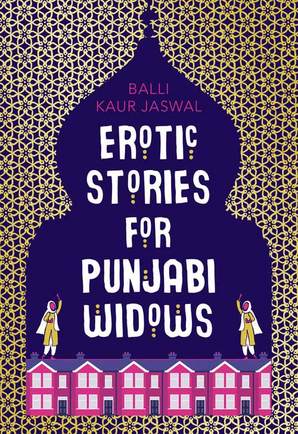 Short blurb: An engaging exploration of the clash between generations (parent/child), culture (Indian/British/British-born Indian), tradition vs updated ideas, expectation vs reality, and lies vs truth, told with fascinating ethnic details and a sobering murder mystery that sheds light on a dark practice and allows the women of the community to band together in support of each other.

Synopsis: This is Balli Kaur Jaswal’s third book, but the first available in the States. A fascinating woman in her own right (Ms. Jaswal was “born in Singapore and grew up in Japan, Russia, and the Philippines”), she won acclaim for her first two novels, and I was thrilled to read this pre-published version of her soon-to-be-released third.

The story centers around Nikki, a first-generation British-Indian woman in her early twenties. Seeking independence from her family’s expectations after dropping out of law school, she moved out of her parents’ house to a flat above the pub where she works. She recognizes her life isn’t going the way she wanted it to, but she’s not sure where her passion truly lies. While trying to figure it out, she has managed to become estranged from her father, who then passed away in India without a reconciliation, and she rarely speaks to her mother, who still keeps house for Nikki’s older sister, Mindi. Mindi has decided to go the traditional route and is seeking an arranged marriage, though she’s doing the searching herself. When Mindi asks Nikki to edit her personal ad, and then post it at the Sikh temple in Southall, the heart of the London Punjabi community, it sets off a chain reaction of events that brings surprising passions forth.

Everything the women do in the class needs to be kept a secret, even from Kulwinder, the woman who coordinates the women’s activities, because of the Brotherhood, a group of young men who have decided it is their place to police the activities of the Punjabi community from their own moral standpoint. Threads of subplots entwine as the reader learns how and why Kulwinder’s daughter died, what her daughter’s death implies about another Punjabi girl’s death years earlier, and that the widow women’s gossip is more than rumors and lies. Just enough apart from the Sikh community to see patterns that don’t make sense, Nikki finds herself drawn in deeper as she begins to ask some pointed questions.

Personal notes: Diving this deeply into another culture was a fascinating experience. Everyone has a set of expectations placed upon them, whether by their families or their community or their teachers or their bosses, but having them be this steeped in the history of a country, in the history of immigrants and immigration, and in the continuation of cultural practices brings those expectations to a new level, and made me proud of Nikki for trying to push back in her own way to live her own life, even if she didn’t have a firm idea of what that life could, should, would be. Juxtaposing her decision with her sister’s (to have the arranged marriage) was a lovely illustration of how the next generation could also make a combination of expectation and updated values work.

In addition, the ethnic details gave me such a real sense of being there, in as much as I understood what those tastes, smells, textures, flavors, etc. were. I love reading details like that, so it really appealed to me to learn about clothing in this community and what it signified, food I had never heard of before, how the community functions in terms of hierarchy, how the Sikh temple functions in terms of serving the community, etc. It gave me such a complete encapsulation of a community I have no part of. This book would not have been the same without that level of detail, and yet at the same time, it was worked seamlessly into the book without becoming a laundry list of description. I can tell why Ms. Jaswal has been so lauded, and look forward to reading what she writes next.