Two for the price of one today, as I do a quick mention of Nina George’s international bestseller, The Little Paris Bookshop (for my full review, click here), and then go into a longer review of The Little French Bistro, coming out this month. 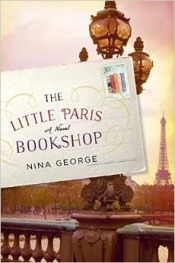 Full disclosure: I sobbed during the last three chapters and epilogue of this book. It was totally worth it.

M. Perdu runs a literary apothecary on a barge in Paris, “diagnosing” inner ailments, “prescribing” books as treatments. Sadly, M. Perdu cannot heal himself. When a heartbroken woman moves in across the hall, the wound is lanced, beginning M. Perdu’s internal and external journey to squeeze all the poison out (pardon the medical metaphor). A pleasure to read about love, comfort, and camaraderie still being figured out in characters that weren’t in their 20s or even their 30s (most of them), but in their 40s, 50s, and beyond.

Publisher Description: Marianne is stuck in a loveless, unhappy marriage. After forty-one years, she has reached her limit, and one evening in Paris she decides to take action. Following a dramatic moment on the banks of the Seine, Marianne leaves her life behind and sets out for the coast of Brittany, also known as the end of the world.

Here she meets a cast of colorful and unforgettable locals who surprise her with their warm welcome, and the natural ease they all seem to have, taking pleasure in life s small moments. And, as the parts of herself she had long forgotten return to her in this new world, Marianne learns it s never too late to begin the search for what life should have been all along.

With all the buoyant charm that made The Little Paris Bookshop a beloved bestseller, The Little French Bistro is a tale of second chances and a delightful embrace of the joys of life in France.

WildlyRead Shelf-talker: Another sumptuous tale from the best-selling author of The Little Paris Bookshop. While this tale weaves its way from Germany to France following downtrodden Marianne on her journey of self-discover, the reader will be enthralled by the luscious language of food and the vivid descriptions of the sea and the countryside, and will revel in the self-fulfillment and true love that Nina George’s characters all find.

Personal Notes: CAUTION: SPOILERS ABOUND Though I found the descriptions to be just as lovely in The Little French Bistro as I did in The Little Paris Bookshop, the story, characters, and overall writing did not impact me as positively in this second novel as it did in the first. Maybe there were too many characters in too short a book to do them all justice, but I found myself wanting to know more and more about the secondary and tertiary characters, rather than just Marianne. Also, for a book that is German and French in nature, the almost complete happy ending came as a bit of a surprise. I wasn’t expecting a Hollywood bow on top of the romances for the characters. Except, of course, and SPOILER ALERT, the gay character dies. It’s 2017! Please excuse me while I rant for a second, but I’m tired of that antiquated bullshit that the gay character must always die in some homophobic punishment. I don’t applaud books that have gay characters in them and then follow tired tropes rather than exploring that relationship and allowing it to be one of the happy ones. Either Ms. George or her editor needs a wake-up call there. And lastly, Marianne herself. She really was quite the pitiable character at the beginning, and while it was a pleasure to what her grow and come into her own, I found her decision at the end SPOILER ALERT to go back with Lothar to be completely out of her new character. Perhaps it was showing how hard it is to truly pull away from abusive indoctrination, but I’m sorry, after that night of “Marianne saves the day,” for her to then wake up the next morning and think, “Oh, I’m living a lie, I’m not this person,” – I call bullshit. She IS that person. She just SPOILER ALERT comforted a dying woman, delivered a baby, played music at a party in public, dealt with having both her lover and her husband at the same event, etc. etc. etc. If she was going to be all wishy-washy waffley and go back with her husband, it should have been part of the thought process BEFORE she acts all baller and does ALL THE THINGS in that one evening. I just don’t see it happening afterward, which makes it nothing more than a plot device to get her back to Paris so that she then ends up SPOILER ALERT surprising Yann at the gallery, and I really expected more from Ms. George considering the depth in her first novel. This felt like she wanted to capitalize upon the success of the The Little Paris Bookshop, which I in no way fault her for, but The Little French Bistro deserved a little more time cooking and editing, in my estimation. That said, I think it’s still a perfectly lovely little summer read, and again, I admire how people of all ages and stages in life are discovering love and friendship in a Nina George novel.