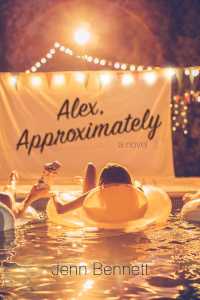 Publisher Description: Classic movie buff Bailey “Mink” Rydell has spent months crushing on a witty film geek she only knows online by “Alex.” Two coasts separate the teens until Bailey moves in with her dad, who lives in the same California surfing town as her online crush.

Faced with doubts (what if he’s a creep in real life—or worse?), Bailey doesn’t tell Alex she’s moved to his hometown. Or that she’s landed a job at the local tourist-trap museum. Or that she’s being heckled daily by the irritatingly hot museum security guard, Porter Roth—a.k.a. her new arch-nemesis. But life is whole lot messier than the movies, especially when Bailey discovers that tricky fine line between hate, love, and whatever-it-is she’s starting to feel for Porter.

And as the summer months go by, Bailey must choose whether to cling to a dreamy online fantasy in Alex or take a risk on an imperfect reality with Porter. The choice is both simpler and more complicated than she realizes, because Porter Roth is hiding a secret of his own: Porter is Alex…Approximately.

Short Blurb: Potential subtitles for this novel include: How to Make the Best of Bad Situations, or Movie Glam Girl Meets Sweet Surfer Boy. If that second titles sounds like an internet dating ad, it’s not far off. “Mink” (East Coast) meets “Alex” (West Coast) in an online movie forum. Is it a crush? Is it simply classic film chit-chat? Bailey Rydell meets Porter Roth when she moves from DC to CA. Is their frenemy status a way to pass the time at work or something more? Vintage clothes and a sweet Vespa, surfing legends and beach parties make this a delightful summer read.

Personal Notes: Gush, gush, gush. I cannot say enough good things about everything Jenn Bennett has produced in recent years. I’m a huge fan of her Roaring 20s adult paranormal romance series, and so was thrilled when she started writing YA. Her first YA – The Anatomical Shape of a Heart – is a favorite of mine, as evidenced by this review here, and my love for Alex, Approximately is no different. In fact, the only thing I didn’t like about A,A was its title! I would love to hear from Ms. Bennett if this was her choice or not. One of the reasons I don’t like it is that it makes the male character – Alex/Porter – seem more like the focus of the novel, when in fact, it’s mostly Mink/Bailey’s story. I can’t stand anything that devalues the female’s place/role in their own story, so the title irks me. But that could have been a publisher decision, and so I say the rest of the book stands on its own two feet. (Also, the cover must have been a publisher decision as well, because I would have chosen something more glamorous, or again, more directly related to Mink, like glam movie sunglasses or the turquoise Vespa with leopard print seats, and I also would have kept the design similar to what they did with TASoaH, so that the two books shelved together could draw attention to the ONE author, like with Sarah Dessen’s books or Jennifer E. Smith’s. Of course I realize this is impossible since they were published by different houses, but still, minor grumble.)

So, what did I love about this book so much? The characterization, of course! The characters in a Jenn Bennett novel can be counted on to be multi-dimensional without being tortured (groan). I am SO over teen characters being whiny and dramatic. That’s not to say there isn’t depth here – both Bailey and Porter have literal and figurative scars from traumatic life events – but they’re aware of the scarring, they face the scarring, and throughout the course of the book, they deal with their ongoing issues as a result of the traumatic events. Clearly they have issues – they’re using fake names in online forums and are dealing with normal teenage problems IRL – but they’re both level-headed about them, as much as anyone can be, and that’s incredibly refreshing (and comes as no surprise, considering the characters in TASofH are like that as well).

Both characters are movie buffs, but that shows up more with Bailey’s personality and presentation. She models her hair and clothes on movie stars from the 50s and her father gets her a turquoise Vespa with leopard print on the seat for her to drive around her new hometown in California (jealous). She refers to herself as The Artful Dodger (proving she has a literary bent – Charles Dickens/Oliver Twist reference) because she has a tendency to avoid confrontation of any kind, but throughout the course of the book, learns how to tackle some tough issues – friendship, romance, sex, divorce – head-on. Porter is a surfer, through and through, but he’s no cliche (thank goodness!). His father and grandfather are surf legends, but his family is also struggling financially, and so Porter works two jobs during the summer – one at the local tourist trap museum and one at his parents’ surf shop. I love that both teens are such well-rounded characters, so that what could be a summer romance bore turns into something sweetly unique and interesting to read.

My only disappointment was the title: Alex, Approximately. This book is really about Mink/Bailey, not Alex/Porter, and so I was not a fan of the title giving preference to the Alex character. I’m sure they could have come up with something better than that, and yes, from a feminist reading standpoint, I was very disappointed in that erasure of Bailey’s character. But don’t let that stop you, because I’m sure that was a publishing company decision and not a Jenn Bennett one. Jenn’s writing is an absolutely delight, and I highly recommend reading this, regardless of what it’s called.