This probably seems like a morbid post to be writing at this time of year. It’s Chanukah, Christmas is just around the corner, and then there’s the New Year. In my defense, this list doesn’t reflect my state of mind, other than to say that someone mentioned a book and as a veteran bookseller my mind immediately went to three other books of related interests, and from there this list was born. Once I’d thought up ten titles in this category – featuring in some way the Grim Reaper, Death itself, or death rituals – without breaking a sweat, it seemed too funny and frankly interesting to not share it. So here you are:

This was the book that began this list. My co-worker, Amber, sent me this staff pick, and I was off and running (also, it’s a Printz Honor Award-winner, so you know it’s good):

“Thou shalt kill.”
This deliciously dark and inventive new take on dystopian fiction will be impossible for any reader to put down, and absolutely desperate for its sequel.In a future where mortality is no longer a threat, where people can become young again and be revived from death, humanity requires Scythes, revered and feared, whose sole purpose is to cull the population by taking lives. Ages 14+ 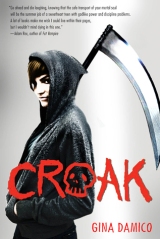 I first read this book in 2012. Here is the review I wrote of it then: Irreverent and hysterical, Croak tells the surprisingly believable story of the Grim Reaper. Or Reapers, to be precise, as there’s a whole group of Grims, and Lex Bartleby’s Uncle Mort is the head of them all. Shipped off to upstate New York to “milk cows or something,” Lex is surprised to find out she’s actually a Grim apprentice – and more than that, she’s the best Grim apprentice anyone’s ever seen. But when someone starts using the Grim powers to Kill people who haven’t yet died, Lex is torn – they’re killing bad people, like murderers, who Lex secretly wishes were dead, but it’s also an unforgivable use of Grim powers. As Lex and her friends get closer to uncovering who is doing this, she struggles harder with the question of whether to join the rouge Grim or turn them in. Ages 12+ 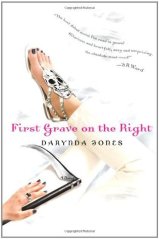 3. First Grave on the Right (Charley Davidson #1) by Darynda Jones

No list of Grim Reaper books would be complete without this romance novel series starring the Grim Reaper herself. I first read book 1 in 2011, and this is my review written then (think Janet Evanovich’s Stephanie Plum-turns-Grim Reaper with more heat in all the ways): In First Grave on the Right, Charley is helping to solve the murder of three lawyers, also while working on a side project – trying to figure out just who, or what, that deliciously sexy man is who keeps slipping in-and-out of her day- and nighttime dreams. The lawyers were working to free an innocent man convicted of the murder of one teenage boy and the disappearance of his own nephew. Meanwhile, when she finds him, the man of her dreams (literally), happens to be in prison. In a coma. And has three days left before the state pulls his life support. With the help of her assistant, Cookie, several ghosts, and reluctantly working with hunky, skeptic, fellow PI Garrett Swopes, Charley tries to connect the dots between an abandoned warehouse, a human trafficking ring, a priest, the innocent man, the missing boys, and the lawyers. All while racing against the clock to find a way to save Reyes Alexander Farrow, the convicted murdered in a coma, who happens to appear very much awake and alive the several times he appears to either kiss her or save her life.

Last but not least in the Grim Reaper round-up is the infamous Christopher Moore’s two-book Grim Reaper series.

Publisher copy: Charlie Asher is a pretty normal guy with a normal life, married to a bright and pretty woman who actually loves him for his normalcy. They’re even about to have their first child. Yes, Charlie’s doing okay—until people start dropping dead around him, and everywhere he goes a dark presence whispers to him from under the streets. Charlie Asher, it seems, has been recruited for a new position: as Death.

It’s a dirty job, but hey! Somebody’s got to do it.

5. The Book Thief by Markus Zusak

The last fiction book on this list is probably the most famous, having been a book club favorite for years, translated into over 40 languages, etc. etc. etc. It’s narrated by Death, who tells the story of a little girl named Liesel during World War II in Germany.

Publisher description: A story about, among other things: A girl, some words, an accordionist, some fanatical Germans, a Jewish fist-fighter, and quite a lot of thievery. . . .an unforgettable story about the ability of books to feed the soul.

6. The Dead Beat: Lost Souls, Lucky Stiffs, and the Perverse Pleasures of Obituaries by Marilyn Johnson

Moving on to non-fiction, Marilyn Johnson writes about the art of writing someone’s life story in this ode to obituaries. I personally have never been an obituary reader, in part because I am always disappointed that they leave out all the scandalous bits I’m really interested in, but I greatly enjoyed reading this book, and it’s what led me to (somewhat naively) declare 2017 to be my year of reading non-fiction (that didn’t really happen). It’s the best type of non-fiction writing, in my opinion, because it’s well-researched, informative, and engagingly written, so it checks off all the boxes of a good, solid read worth your time. 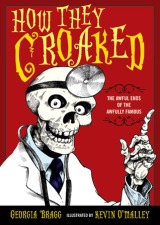 7. How They Croaked: The Awful Ends of the Awfully Famous by Georgia Bragg, illustrated by Kevin O’Malley

For those who want more details than the obituaries provide, books like How They Croaked provide all the nitty gritty on 19 different (in)famous deaths. Ages 11+

8. Rest in Pieces: The Curious Fates of Famous Corpses by Bess Lovejoy

For some, their journies are not over when they die. Famous corpses are often disturbed and their bodies spread out to many final resting places.

Publisher description: From Mozart to Hitler, Rest in Pieces connects the lives of the famous dead to the hilarious and horrifying adventures of their corpses, and traces the evolution of cultural attitudes toward death.

9. Stiff: The Curious Lives of Human Cadavers by Mary Roach

I’m a big Mary Roach fan, for the same reasons I’m a fan of Marilyn Johnson – well-researched, informative, and yet written in a prose reminiscent of fiction sometimes, painting word pictures in addition to lists of facts. I first read this book in 2013 for a “Women in Science” book club I had joined in an effort to make friends in a new town I had just moved to, which makes me sound like a better person than I really am as this was the only book I read for the club and the only meeting I attended. But it stuck with me, and I’ve been a Mary Roach fan ever since. My one issue with the book was that it didn’t dive into much of the cultural elements and rituals surrounding death practices in various places, but it’s not a critique of the book, as that’s not the research she was doing or the story she was telling. For that book, try this next one.

10. From Here to Eternity: Traveling the World to Find the Good Death by Caitlin Doughty

I picked this up for the cover, stayed for the title, am engrossed by the subject matter.

Publisher description: The best-selling author of Smoke Gets in Your Eyes expands our sense of what it means to treat the dead with “dignity.” Fascinated by our pervasive terror of dead bodies, mortician Caitlin Doughty set out to discover how other cultures care for their dead.