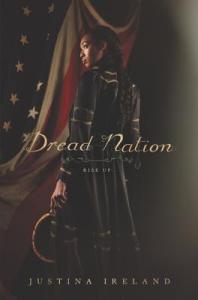 Publisher Description: At once provocative, terrifying, and darkly subversive, Dread Nation is Justina Ireland’s stunning vision of an America both foreign and familiar–a country on the brink, at the explosive crossroads where race, humanity, and survival meet.

Jane McKeene was born two days before the dead began to walk the battlefields of Gettysburg, Pennsylvania–derailing the War Between the States and changing the nation forever.

In this new America, safety for all depends on the work of a few, and laws like the Native and Negro Education Act require certain children attend combat schools to learn to put down the dead.

But there are also opportunities–and Jane is studying to become an Attendant, trained in both weaponry and etiquette to protect the well-to-do. It’s a chance for a better life for Negro girls like Jane. After all, not even being the daughter of a wealthy white Southern woman could save her from society’s expectations.

But that’s not a life Jane wants. Almost finished with her education at Miss Preston’s School of Combat in Baltimore, Jane is set on returning to her Kentucky home and doesn’t pay much mind to the politics of the eastern cities, with their talk of returning America to the glory of its days before the dead rose.

But when families around Baltimore County begin to go missing, Jane is caught in the middle of a conspiracy, one that finds her in a desperate fight for her life against some powerful enemies.

And the restless dead, it would seem, are the least of her problems.

WildlyRead Shelftalker: Cinder meets The Gentleman’s Guide to Vice and Virtue meets Pride & Prejudice and Zombies. A mixed-race young woman trained to kill zombies tries to keep herself and her friends alive while navigating the treacherous landscape of post-Reconstruction America.

WildlyRead Thoughts: What Marissa Meyer’s Lunar Chronicles series (Cinder is book 1) did for fairytales and cyborgs, Justina Ireland has done for post-Civil War America and zombies. Add a little bit of Mackenzie Lee’s The Gentleman’s Guide to Vice and Virtue, and you’ve got yourself an incredibly ambitious, sexually subversive, racially tense, edging on horror, incredibly evocative description of an alternate history of the lives of Black and White and Native Americans post-Reconstruction. And, I’m very pleased to say, Ms. Ireland nails it.

Inspired by the phenomenon Pride & Prejudice and Zombies, Ms. Ireland wanted to write something more racially realistic. She’s quoted as saying, “Sure, you have well-to-do white women fighting, but it didn’t seem realistic. It would’ve been black women fighting in the streets” (Bustle, 06/19/2017). An author’s note at the end of the book describes how she researched the Carlisle Indian Schools and other American Indian boarding schools, which she also used as inspiration for the combat schools, like Miss Preston’s School of Combat, that Jane attended. Those touches of history serve to make this book all the more harrowing for their basis in reality.

For instance, it’s not the zombies (known as shamblers) or the zombie killings that stayed with me long after I read this, but the casual cruelty, the denial of basic humanity, and the snippets of memories shared among former slaves and the *SPOILER ALERT* {way Jane gets whipped in Summerland} are what feature in my nightmares. Intellectually I’m aware that inhumane treatment of people exists to this day – my family are Jews who fled Europe due to persecution, after all – but it makes me sick to my stomach to read it.

That said, the book is so beautifully balanced that it didn’t leave me feeling too depressed. Jane herself isn’t a depressed character. She’s got an incredible spirit that keeps on fighting, and not just fighting, but strategizing, cataloguing, learning, thinking, growing, feeling, and so perfectly embodying what it means to be human. She really owns her sexuality, too, which was refreshing – if she was attracted to a man, she recognized that feeling and enjoyed it; if she was attracted to a woman, she did the same; yet at the end of the day, she was well aware that she had lost her heart to a circumstance we only get glimpses of in this book. I’m really hoping we see more of the history and development of that relationship in what are sure to be subsequent novels.

This book is going to be hard for some people to read, and again, I don’t mean because of the zombies. I mean because they’re White. Dread Nation is not a book that paints White people in a positive light, and you know what? That’s okay. I admit, it made me uncomfortable at times. There is hardly ever a moment that Jane is not aware of what her racial heritage is, what her features are as a result, and what that means in this society. Entire plot points revolve around who is able to pass as White (which, btw, not entirely a spoiler, but there is a doozy of a reveal near the ending of the book that’s both an, “Oh, duh!” moment and also a, “I can’t believe I didn’t see that coming” moment that was shockingly good), and the fact that Jane has to be constantly thinking of her race and the race of others was, frankly, exhausting, but that was and maybe still is a fact of life for people that I’ve never experienced portrayed as clearly as in this book.

This is not everybody’s experience – it’s an alternate history about zombies; from that perspective it’s no one’s experience – but I would posit that this was a lot of Black people’s experience with Whites, maybe even to this day, at least on the emotional end of the spectrum.  I really applaud Ms. Ireland for tackling this topic – the constant onslaught of unfair reality at every turn brought upon you by the circumstances of your birth and your skin color – and making it so relatable. This wasn’t a book that bashed Whites for the fun of it. It was a nuanced portrayal of representation within society: Whites, Blacks, Natives, and the mixed-race people who could pass as White. I’m astonished at what Ms. Ireland was able to accomplish, and am looking forward to reading more of this story.