Today will actually be a mini-ode to the author/illustrator genius of husband-and-wife team Audrey and Don Wood who publish a lot of work with Houghton Mifflin Harcourt. 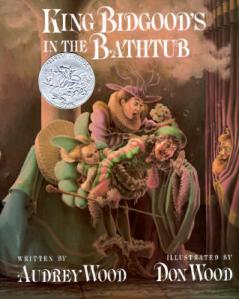 A Caldecott Honor-winner, this book is a true delight to both read and look through, as there is so much happening in the illustrations that you’ll want to spend forever discussing each page. Quirky rhyming at its best, this story is about King Bidgood who won’t get out of the bathtub.

“Help! Help!” cried the Page when the sun came up.
“King Bidgood’s in the bathtub, and he won’t get out!
Oh, who knows what to do?”

The people of the court including the Queen, a Knight, and a Duke suggest various amusements to tempt the King out of the tub, but none of them work. All of the suggestions are adapted to working within the tub. Much hilarity for the readers ensue, while the poor Page has to run around not knowing what to do until FINALLY at the end of the day, he figures out a way to force the King out.

You’ll find a similar depth of illustration in this picturebook, but a little less light-hearted story. Sunday, Monday, Tuesday, Wednesday, Thursday, Friday, and Saturday are seven children told by their mother to not let any strangers in and don’t touch fire while she goes to the market. She intends to bring back something for each one of them, but while she is gone, a clever witch convinces the children to open the door, light her pipe with sticks from the fire, and then turns them into food. When their mother gets back, she must rely on how well she knows her children in order to save them from being eaten by the witch. The illustrations are too bright to really be scary, and the mother is a tremendously loving force to be reckoned with at the end.