Fall is upon us! And during October, so will be these new releases: 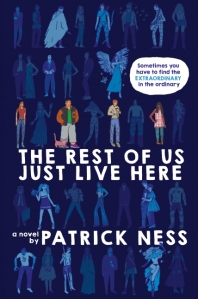 I DEVOURED Patrick Ness‘s Chaos Walking trilogy, cried at A Monster Calls, and clearly will be picking this up ASAP.

Publisher Description: What if you aren’t the Chosen One?

The one who’s supposed to fight the zombies, or the soul-eating ghosts, or whatever the heck this new thing is, with the blue lights and the death?

What if you’re like Mikey? Who just wants to graduate and go to prom and maybe finally work up the courage to ask Henna out before someone goes and blows up the high school. Again.

Because sometimes there are problems bigger than this week’s end of the world, and sometimes you just have to find the extraordinary in your ordinary life.

Even if your best friend is worshipped by mountain lions.

Award-winning writer Patrick Ness’s bold and irreverent novel powerfully reminds us that there are many different types of remarkable. 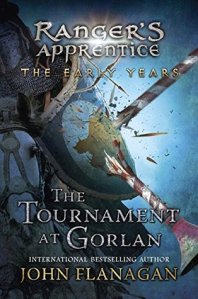 The Ranger’s Apprentice series is one of my favorite recommends for boys age 9 and up. This is a coming-of-age fantasy series with medieval elements, featuring lots of action and adventure, highlighting various types of relationships made and grown over the years (parent-child, friend-friend, and romantic), and, of course, great heroism. I have no doubt that tradition will continue in this prequel series.

Publisher Description: When Halt and Crowley discover that the ambitious Morgarath has been infiltrating the Rangers in order to corrupt the Corps, the young Rangers travel north to find Prince Duncan, seeking a royal warrant to stop Morgarath before it is too late. By weakening the Rangers, the most powerful force in support of the King, Morgarath plans to steal the throne.

Yet when Halt and Crowley arrive in Gorlan, they discover just how close Morgarath’s scheme is to success. Morgarath has a plan to discredit the Prince and alienate him from his father. At the same time, the Baron of Gorlan has been conspiring to win the trust and admiration of the Council of Barons to further his plan. If the young Rangers are to prevent the coup from succeeding, they will have to tread a dangerous path, which leads them to a thrilling climax at the annual tournament at Gorlan, where a series of bitter duels must be fought and won.

This origin story brings readers to a time before Will was an apprentice, and lays the groundwork for the epic battles that will culminate with The Ruins of Gorlan and The Burning Bridge—Books 1 and 2 of the Ranger’s Apprentice series. 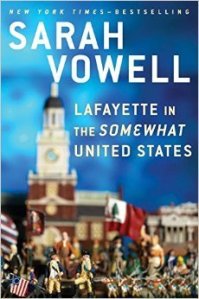 Sarah Vowell is a master of essays, snarky asides, and giving the whole historical context to whatever subject she sets her sights on. She reads her own work in a really engaging way, so if you’re up for an audio book, I highly recommend this one.

Publisher Description: On August 16, 1824, an elderly French gentlemen sailed into New York Harbor and giddy Americans were there to welcome him. Or, rather, to welcome him back. It had been thirty years since the Revolutionary War hero the Marquis de Lafayette had last set foot in the United States, and he was so beloved that 80,000 people showed up to cheer for him. The entire population of New York at the time was 120,000.

Lafayette’s arrival in 1824 coincided with one of the most contentious presidential elections in American history, Congress had just fought its first epic battle over slavery, and the threat of a Civil War loomed. But Lafayette, belonging to neither North nor South, to no political party or faction, was a walking, talking reminder of the sacrifices and bravery of the revolutionary generation and what they wanted this country to be. His return was not just a reunion with his beloved Americans, it was a reunion for Americans with their own astonishing singular past.

Lafayette in the Somewhat United States is a humorous and insightful portrait of the famed Frenchman, the impact he had on our young country, and his ongoing relationship with some of the instrumental Americans of the time, including George Washington, Alexander Hamilton, Thomas Jefferson, and many more.