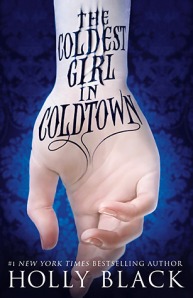 What I love most about Holly Black as a writer is that she makes it seem so easy to completely explode apart a genre with her own unique take.

Holly Black: “So, you think you know all about mythical creatures? Bam! The Spiderwick Chronicles.” “Have you had faerie tales read to you since you were a child? Boom! Modern Faerie Tales.” And finally: “Is the market over-saturated with vampire novels? Ta-da! The Coldest Girl in Coldtown.”

Quick set-up: Vampires exist. The time is roughly now. Several years ago, a rogue vampire bit a bunch of people all over the US.

Side bar: People bitten by vampires become infected or “cold” with the vampire “illness”. They, in turn, thirst for blood, bite other people, and thus after drinking the blood are reborn into actual vampires. If, however, you can survive not drinking human blood for 88 days, you will get over your “illness” and not actually become a vampire.

Back to the plot: Those people bit more people until the vampire illness spread all over the world. Once the governments caught on to what was happening, they created quarantined areas to try to control the outbreaks. These areas became known as Coldtowns. The first and oldest Coldtown in America is in Springfield, Massachusetts, not too far away from where Tana lives.

Tana’s backstory: Tana is 17, and lives with her younger sister, Pearl, and their father. Her mother is dead, beheaded with a shovel by Tana’s father. This happened years ago when Tana’s mother was bitten by a vampire. They tried to keep her contained to the basement under lock and key throughout the 88 days, but as the screaming and pleading and crying from the basement got worse and worse, Tana, poor, young child that she was, couldn’t withstand it, and undid the locks. Tana’s mother, no longer in her right mind, attacked Tana, tearing into the flesh of her arm. Tana’s arm still bears the scar; so does Tana’s family as her father drinks himself into oblivion and Tana acts more as Pearl’s mother than her sister.

The plot in short: Tana attends a house party at a farm outside of town. She wakes up to find almost everyone dead, clearly bitten and drained by vampires. The only other human not dead is her smarmy ex-boyfriend, Aidan, who’s clearly been bitten and is now chained to a bed in a room with another, chained, vampire. Gavriel, the vampire, has resisted Aidan so far, and so Tana makes the decision to rescue all three of them – Aidan, Gavriel, and herself. She manages to accomplish this, but in doing so, gets partially bitten by one of the bad vampires who attacked the house in the first place. Not knowing whether she has been infected or not, Tana decides to go to Coldtown with the other two, hoping that by doing so, she will not only be taking care of herself if she is infected, but that by staying away from those she loves (her family and BFF, Pauline), she will be keeping them safe. The story continues from there (and is similar to the style I just used to explain this – current plot chapters interspersed with brief aside or backstory chapters).

Notice I called the vampire that bit her one of the bad vampires? That’s one of the interesting things Holly Black chooses to do with this book and these characters. She explores ideas of innate goodness, nurtured evil, humanity, mercy, sacrifice, loyalty, and redemption in both humans and vampires. She also, thank goodness, knows how to move a plot forward, and so she doesn’t write ad naseum about these ideals, but rather shows them through action and inaction, cause and affect, as well as some brief character contemplation. Lastly, she knows trilogies can often be tiresome, and so she ties up this impressive fully realized plot by the end of her 400+ pages (hooray!).

What’s most impressive about The Coldest Girl in Coldtown isn’t the vampire sex (this is YA after all, so if you want that, check out Christine Warren’s The Others series, specifically One Bite With a Stranger or You’re So Vein, or Laurell K. Hamilton’s Anita Blake, Vampire Hunter series) or the vampire politics (though all vampires do like to scheme, it’s pretty straightforward in this novel; for that, try J.R. Ward’s Black Dagger Brotherhood [there’s some pretty rockin’ sex in those, too] or Keri Arthur’s Riley Jensen Guardian series). It’s the characterization of 17-year-old Tana Bach, and the realistic and relatable responses she has to a series of almost unimaginable situations. For those who get pop-culture references, she’s as kick-ass as Buffy [the Vampire Slayer] (without the ditz) and as loyal to herself and her friends as Bo [from Lost Girl] (without the sex). FINALLY, a character who DOES something! She puts one foot in front of the other, always moving forward, even if and when she’s literally moving backward, retracing her steps, to help someone left behind. She keeps her word, without being a goody-two-shoes, and manages to narrowly avoid a love triangle (hallelujah – is anyone else as tired as I am reading those?) by clearly seeing through the smarm and going for the offbeat charm instead. I’m going to avoid comparisons with other (*cough*inferior*cough*) vampire novel “heroines” (*cough*IhateBella*cough*), and instead just say that Tana is the character, in my humble opinion, we all hope we will be should a situation like this ever happen to us.

Whoever invented book trailers was brilliant, and this book has an appropriately eerie one.