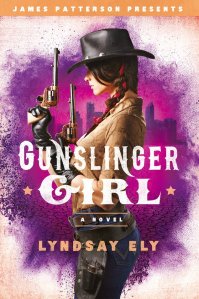 As much as I’d like to say I don’t judge a book by its cover, sometimes I do pick one up solely because the cover calls to me. Isn’t this cover intriguing? I want to be her. So I picked it up and read her in almost one sitting (darn that work shift getting in the way), and now I can’t stop talking about how much I love this book. It’s a debut novel, too! Which means to me, and no pressure, Lindsay, but I’m excited for all the years of reading your works ahead of me.

Seventeen-year-old Serendipity “Pity” Jones inherited two things from her mother: a pair of six shooters and perfect aim. She’s been offered a life of fame and fortune in Cessation, a glittering city where lawlessness is a way of life. But the price she pays for her freedom may be too great…

In this extraordinary debut from Lyndsay Ely, the West is once again wild after a Second Civil War fractures the U.S. into a broken, dangerous land. Pity’s struggle against the dark and twisted underbelly of a corrupt city will haunt you long after the final bullet is shot.

Shelf-talker: Watch out, Annie Oakley! Serendipity Jones has come to Cessation, and she’s making her (expert) mark on the city of sin. This riveting debut novel follows Pity as she escapes a forced marriage and the 87th Commune (the only home she’s ever known) and heads toward Columbia, across the “Wild West” of a post-Second Civil War landscape. Deadly Scroungers and a well-timed rescue derail her plans, leading her to Max and the Theatre Vespertine. Though Pity’s now enjoying more creature comforts (delicious food, luxurious rooms, stylish clothes) than she’s ever known, every day she stays in Cessation comes at a cost: complete loyalty to Selene, who rules Casimir (Cessation’s “house of ill repute” and the home of the theater) with a velvet-covered iron fist, and Pity’s struggle to decide whether she will allow her sharpshooter skills to be used for an act far more deadly than the mere marksmanship she displays before an audience. When Pity finds herself at the center of a plot to overthrow Selene, she must decide what is more important: the lives of her new friends, her new love, or her freedom – the one thing she’s always wanted but has not been able to secure. A fast-paced, riveting debut novel featuring a cast of kick-ass females. While the ending does not disappoint, there’s plenty of story left for a possible book 2.

Personal Notes: Two thumbs way, WAY up! I devoured this book, and challenge you not to do the same. The world building was just enough – lots of details that built a full picture but without bogging us down with ones that would make the story drag. I think that was one of the most impressive things about this book: the amount of plot it contained for its length. A LOT happened in those 368 pages, and the storyline just kept moving right along. There wasn’t a lot of down time, and I really liked that. The pace of the book seemed to match the pace of the world Pity lived in. In a futuristic, somewhat dystopian Wild West world like this, I don’t think they would have taken a lot of time to think things through. They would have had a thought and then acted, or let their actions speak for them, both of which we see evidence of many times over during the book.

Also, the cast. So many great female characters! While the males were no slouch either, they weren’t the driving force of the book. There’s plenty of fodder here for a feminist reading, but I’ll contain myself and just list the main females that really pushed the plot forward: six-shooter toting Serendipity Jones herself, of course; her BFF, Finn, who provides comfort, support, and a major life lesson; Pity’s mother-in-memory, and the sharp-shooting lessons she gave Pity; Selene, the ruler of Casimir, with a real friend-or-foe dilemma going on; Siena Bond, the bounty hunter, who may or may not be after Pity, but who certainly knows more than she’s telling; and so on. I could name so many more, but that taste should be enough to convince you that women are the heart and soul of this novel, and I couldn’t be happier in recommending it as a read.